AT alert. Did Google just create a Word Predict tool for the masses? #edtech

Today Google Labs released a new product called Scribe which incorporates their autocomplete technology into a stand alone word prediction text editor.  My first thought was how does this compare to similar word prediction software found in products such as Kurzweil 3000 and Premier AT?

In many ways the word prediction features are very different. The example above from Premier AT is primarily assisting with spelling with some emphasis on word selection.  Google scribe on the other hand is more whole language (not sure what the proper term would be here) in that it predicts phrases in addition to spelling.

Obviously Google Scribe is pulling from the endless well of search queries that underpin Google's search technology, and that makes it incredibly efficient at guessing what you might want to say next.  I think the implications for classroom use with students who struggle with writing are significant.  At the same time I have not had a chance to try this with any students yet to see what limitations exist. 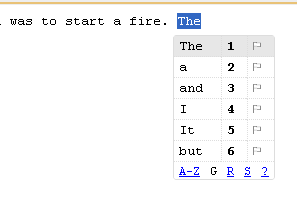 Many Google Labs projects never see the light of day but I could easily imagine this feature becoming integrated into the Google Docs suite.  If this were the case I think that Google might possibly have enabled a fantastic Word Prediction tool for the masses.

Google has created a bookmarklet that opens the Google Scribe feature in any text editing field including those found in Google Docs. I actually enabled it to finish out this post.  For more information on how to use bookmarklets check out this post by Steve Dembo.

I have a feeling this won't be the last time I'll be blogging about the uses of Google Scribe.

Update: I just tried to enable the Scribe bookmarklet in Google Docs and it causes several problems.  Hopefully this will be integrated sooner rather than later.

Posted by Unknown at 6:02 PM No comments:

In this podcast episode I compare and discuss ways to broadcast and record from the classroom using mobile apps like audioboo.com, ipadio.com, and evernote.com. I also share my reflections on this year's 3rd annual 21st Century Learning Symposium hosted by the St. Clair County RESA. I conclude with a look at my recent attempts to set up my own Moodle and WordPress sites using the webhosting service bluehost.com.  Running time:

Posted by Unknown at 3:07 AM No comments:

This work is licensed under a Creative Commons Attribution 4.0 International License.